Ian Kirk, deputy group chief executive of Sanlam says that Sanlam will grow in the healthcare arena. That followed the increase of its headline earnings of three percent to R8.3 billion.

According to figures announced, Sanlam’s short-term insurance earnings via Santam have more than doubled. And Sanlam’s personal finance and retail financial services businesses have both shown very strong growth.

In terms of health care, Sanlam has recently acquired a 30 percent interest in Afro Centric. Medscheme, one of the leading medical aid administrators in South Africa, owns the business. Medscheme’s clients include a number of leading medical schemes including Fedhealth and Bonitas, and also the Government Employees Medical Scheme that is one of the largest in the country.

How Big Could Sanlam Get?

But the question on people’s lips is, does Sanlam want to take on medical schemes like Discovery Health? South Africa’s leading medical aid scheme, Discovery Health has around 2.6 million lives on its books – an unprecedented number.

Kirk pointed out that in the mid-nineties Sanlam was a key player in the medical aid market. However the company, he says, went wrong (“lost its way”) by trying to introduce transformational change too fast. This resulted in the company losing its lead to competitors. 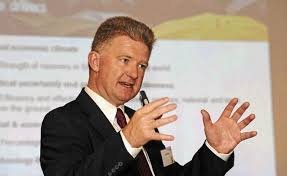 According to Kirk, the issues have changed since then, and now corporate and retail clients are looking for healthcare solutions rather than “top-flight” solutions. All the changes possibilities now afforded Sanlam in terms of healthcare data present, he says “a nice opportunity”.

Kirk answered questions about Santam, the Sanlam “arm” he used to head.

There have been fewer floods, hailstorms and similar weather catastrophes. However, load-shedding affected the short-term insurer, particularly in terms of security systems failing. Acknowledging the risk, Kirk has been quoted as saying there have been no bad experiences on a “significant scale”. Nevertheless he has publicly stated that policyholders should consciously manage all load-shedding related risks.

Set to take over the reins of Sanlam as Sanlam group CEO in January 2016, has also been asked if he has any knowledge of a takeover bid of Sasfin by Sanlam, which he says he knows nothing about.
So how does Ian Kirk feel about taking over the mega-company next year?

Having been part of the group for many years, Kirk says he knows that “things” are always well planned, and he has confidence in the board and his predecessor. Even though he has been in the financial services and insurance industry for a long period of time, he says he is taking the time he has to re-familiarise himself and learn about things that are new to him. But, at the end of the day, Ian Kirk, the incumbent CEO of the Sanlam group is confident: “It’s going well at the moment,” he says.