Cook up a lip-smacking dish full of health-giving spices. This masterpiece is a full on collision between a traditional British roast chicken dinner and gutsy Asian spices.  Jamie Oliver calls it Empire Roast chicken. This recipe combines two favourite meals – roast chicken and curry – to create a curried roast chicken.  Just because it’s curried doesn’t mean you have to forego the roast potatoes and gravy. 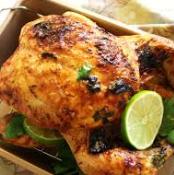 For the Bombay Roast Potatoes:

How to prepare curried roast chicken

Place the chicken in a roasting pan. Mix the marinade ingredients well then spread it all over in the outside and inside of the chicken. Score the legs as they take longer to cook and push the marinade paste into the cuts.

Marinate the chicken for half a day if you can to really make it taste good.

Boil the lemon in hot water for ten minutes then stab it all over with a sharp knife. Place it in the cavity of the chicken so it can release its juices into the chicken meat as it roasts.

Now add the gravy ingredients to the pan.

For the Bombay roast potatoes, add the oil, spices and butter to a separate roasting pan and heat slightly. Add the potatoes and break them open then make sure they are coated in the spiced oil and butter. Season them. Sprinkle the chopped tomatoes, chillies and coriander leaves on top. Then break apart the cloves from the bulb of garlic and smash them with the palm of your hand. (You don’t have to peel them.) Add them to the pan of potatoes.

Give the Bombay potatoes about 45 minutes until they are golden and delicious. The chicken will take about an hour.

Remove the chicken from the gravy. You will probably find that a burnt-looking crust has formed on the chicken. Not to worry. Just remove it gently to reveal the spicy, golden chicken beneath it.

Put the gravy through a sieve and add a little yoghurt.

Serve with pickled atchar, yoghurt, poppadoms and a crispy salad.