People saving towards retirement often overlook or downplay the impact that future healthcare needs have within their retirement planning framework. Medical aid expenses then result in these costs eroding income earmarked for other necessities.

This is the experience of André Lindeque, consultant at leading wealth and financial advisory firm GTC, who advises numerous clients on their financial wellbeing. He believes there should be more diligence in ensuring that retirement projections incorporate the specific increase requirements necessary to provide adequate income levels for medical aid increases and ad-hoc expenses.

“The cost of a medical aid is one of the more significant expenditures for many households, and naturally people are tempted to decrease this line item in their budgets, as they attempt to scale down their lifestyles. However, great care should be taken before considering downgrading your provision for healthcare funding.”

This is mainly due to the likelihood of greater healthcare needs in the retirement years.

Lindeque explains: “When investors are in the accumulation phase of their savings cycle, healthcare is often not high on their agendas, but clients tend to approach us a few years before retirement – often just after they have had a major medical incident – with the realisation that they need to provide more adequately for their healthcare needs in retirement.”

He believes this specific expense should be more astutely factored into retirement income planning, sooner, as it significantly affects the future cash flows that a pensioner is expected to live from, and therefore the individual’s chosen investment strategy.

“Medical cover is likely to remain a significant part of a household’s expenses and affect the future cash flow of retirement savings. Investors need to plan for the impact of medical inflation or the annual increase in premiums, which can average between 3% and 4% higher than the consumer price index,” he says.

This is also indicated in the following table provided by GTC’s healthcare consultants utilising data provided by 21st Century and the Council for Medical Schemes. 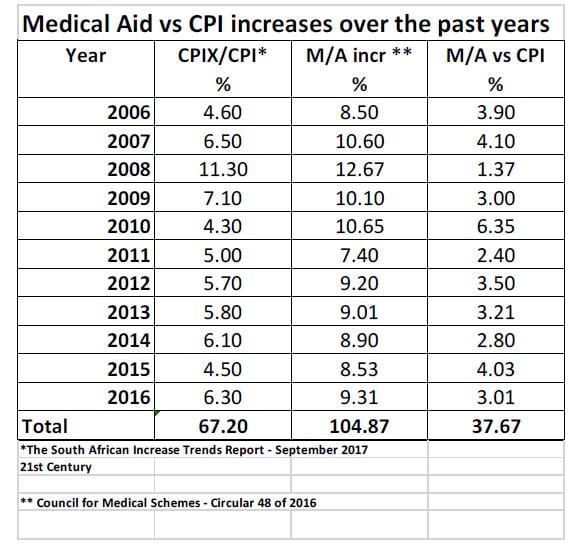 In addition, ad-hoc unforeseen medical expenses are commonplace and require consideration and inclusion in all professionally prepared retirement plans. For retirees, this translates into the need for well-considered healthcare plans, which should be inclusive of gap cover policies that cater for in- hospital medical expenses not covered by the medical aid.  These two plans should be implemented as early as possible, to avoid penalty costs imposed upon late joiners.

Statistics from the most recent Council for Medical Schemes’ Annual Report 2016/2017 reveal that there were approximately 8.9 million members on medical aids in South Africa at the end of 2016. Of these, 7.9% are recorded as over 65-year olds. 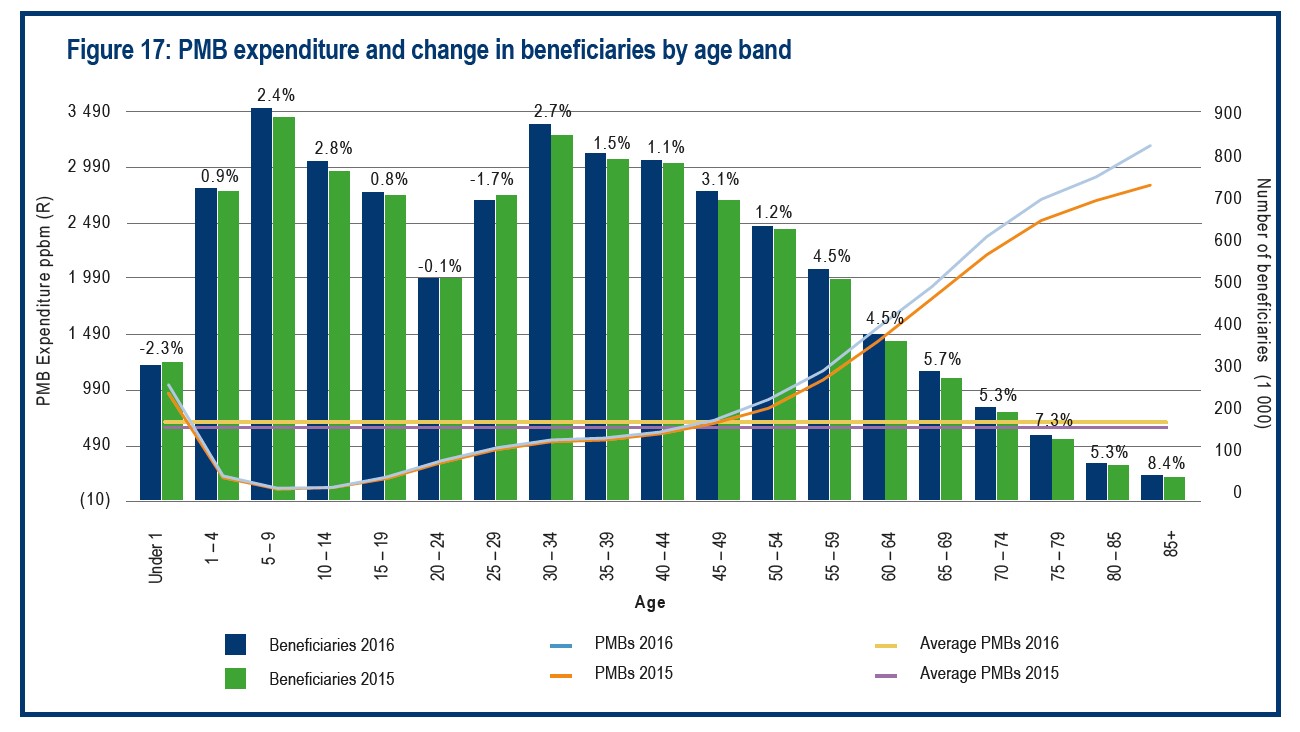 Source: Council for Medical Schemes Annual Report 2016/2017 (Average age of beneficiaries through their age bands between the years 2015 and 2016)

This somewhat complicated graph from the same report reflects the average age of beneficiaries through their age bands between the years 2015 and 2016 (see the blue and green bars). More importantly, the blue and orange lines reflect the average Prescribed Minimum Benefit (PMB) cover provided to each beneficiary age band.

According to the Council for Medical Schemes, a PMB is a set of defined benefits to ensure that all medical scheme members have access to certain minimum health services, regardless of the benefit option they have selected.  The aim is to provide people with continuous care to improve their health and well-being and to make healthcare more affordable.  PMBs are a feature of the Medical Schemes Act in terms of which medical schemes have to cover the costs related to the diagnosis, treatment and care of any emergency medical condition, a limited set of 270 medical conditions (defined in the Diagnosis Treatment Pairs) and 25 chronic conditions (defined in the Chronic Disease List).

From the graph it is evident that the average Prescribed Minimum Benefit (PMB) cost per beneficiary – indicated by the yellow and purple lines – per month was R680 between 2015 and 2016. However, this rises sharply after the age of 45 (blue and orange lines), topping out at over R2 990 per beneficiary per month at the age of 85+.

“Whilst your medical aid will cover most of these PMB costs under the current healthcare framework, this indicates the need to have and maintain optimal healthcare cover into retirement,” says Lindeque.

“There are almost always unexpected additional costs which your medical aid does not cover. These additional costs are so numerous that the Council refers to these costs as ‘out of pocket’ costs and reports them to have totalled R29.7 billion in 2016. This further indicates the need to have additional ad-hoc money set aside for the euphemistic ‘out-of-pocket’ healthcare expenses which could easily destroy any retirement plan, if not adequately accounted for and incorporated.”

The government’s proposed National Health Insurance may promise cheaper universal healthcare over the long term, but there is still considerable uncertainty over the exact mechanics of the scheme – including what it will cover, to what extent, as well as the ultimate cost of the insurance to individuals.

“Given the current state of the South African public healthcare system, combined with an anticipated increase in healthcare needs in the retirement years, it is a reality that every retirement plan should cater for regular and unforeseen medical expenses, which need factoring in at a higher rate to other inflationary assumptions, especially if someone is used to, and would prefer to maintain, private healthcare benefits,” he says.

The Medical Schemes Act prohibits medical aid companies from charging higher premiums for older members, unlike gap cover providers who may do this. Medical aids may, however, charge ‘late joiner’ penalties which can amount to as much as a 75% loading, on members over the age of 35, who have not had previous medical aid cover in South Africa. Medical schemes and gap providers may not reject new applicants, so retirees are free to become new members of any scheme at any point, subject to waiting periods of up to 12 months.

“We therefore encourage membership of both a medical aid and a gap policy as early as possible in an effort to curb unnecessary additional healthcare expenditure as far as possible,” he says.

According to Lindeque, problems arise when retirees have not planned for medical aid expenditure, or the extent of the added ‘out of pocket’ cost to their monthly budgets.

He adds that it is easy to ‘forget’ about a medical aid cost while employed, as this deduction is often taken from the payroll and may even be partially or completely subsidised by the employer.

“We urge individuals to start budgeting for this expense from an early age, in the same way you budget to have a few extra holidays in your retirement. Unexpected and uncovered doctors’ or hospital bills will have a severely negative effect on pensioners’ limited income budgets.

“Healthcare cover – like many other types of insurance – remains a grudge purchase for many individuals. Pensioners should take great care before considering downgrading or removing cover, as future unexpected expenses may have a negative impact on their retirement income should they be unprepared for them. It is crucial, therefore, to include healthcare planning in your overall retirement planning discussions with a qualified and objective professional financial planner, who will factor in the annual increases and additional ad-hoc expenses, ensuring that these costs do not eat away at your well-earned retirement income,” he concludes.